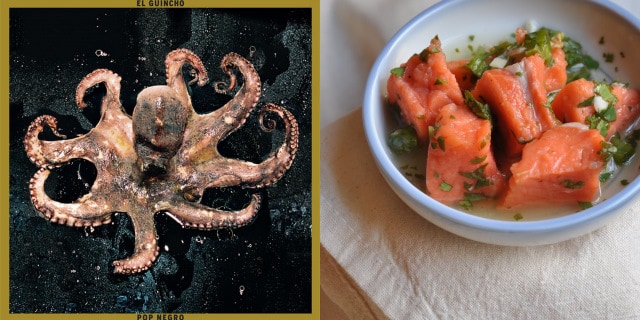 Ceviche is one of my all time favorite foods.  After all, what is not to love when you mix spices, peppers, tropical flavors, and clean fresh fish cooked in citris acids?  It is most commonly associated with Peruvian cuisine, although some historians actually claim that the Spanish introduced the food to South America.  They claim that Spanish ships would normally stock citrus fruits to prevent scurvy, and it is believed that it would have been popular to use citrus acids to “cook” food because it was relatively quick and easy.  Others have suggested that it originated with either the original Polynesian Islanders or the North African Moors before it was passed on to the Spanish and subsequently passed on to South America.  Wherever it originated, it is ridiculously delicious.  Still, its background certainly inspired my choice for today’s pairing.  El Guincho is a Barcelona-based musician, and his latest album Pop Negro is a joyous explosion of sample-heavy tracks built on a foundation of rhythms and melodies borrowing significantly from Afrobeat, Tropicalia, and South American music featuring exuberant Spanish free-associative lyrics.

When asked to describe Pop Negro, El Guincho stated that “the main sentiment is a sort of nostalgic love for the music that I heard on FM radio as a kid/teenager, that ‘promise’ that music gives you, not eternal/eternity because pop music is not supposed to be like that, but that thing you feel when you’re on a car with your friends or family and you listen to a certain hit and it makes you think you want to be inside of that.”  And in that way, he succeeded.  Pop Negro is enveloping.  It is engaging.  More importantly, it is an album that transports you somewhere else: a pristine beach on a sunny island listening to a band featuring Caribbean steel-drums that was heavily influenced by Animal Collective playing syncopated beats and psychedelic pop songs as the sun sets.  Without question, this is an album that you find yourself inside of.  It isn’t music to compliment the mood of a meal – this is music to transform that mood into something else – something festive and warm.  Pop Negro is available from Insound.

Head back to eating/sf to read the recipe for Kasey’s salmon and cilantro ceviche.