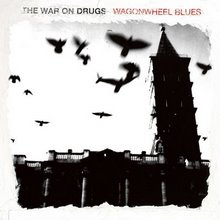 The term “the war on drugs” was first used by U.S. President Richard Nixon, and is rooted in a quintessentially American brand of fuzzy, distorted optimism. Nixon declared a war on drugs in 1971, but the term really reached the height of its use in the 1980s. Offering an idealistic form of distorted Americana that merges mid-60’s/early-70’s folk rock with mid-80’s noise pop, Philadelphia’s The War on Drugs is, in this sense, aptly named. However, the music on their debut album, Wagonwheel Blues, is more ‘pop’ than ‘psychedelic’, and for this reason is better paired with Kasey’s triple chocolate cookies than with magic brownies.

Lead singer Adam Granduciel has a warm, nasal quality to his vocals that immediately invites comparison to Bob Dylan, and to some lesser extent, Tom Petty. The opening track, “Arms Like Boulders,” doesn’t sound entirely unlike a Wilco and Bob Dylan collaboration: lyrics and vocals by Bob and music courtesy of Wilco. However, the bands’ melodies and instrumentation on the remainder of the album, especially guitarist Kurt Vile’s spaced-out guitar riffs, are more reminiscent of My Bloody Valentine or Broken Social Scene. For example, the second track on the album, “Taking the Farm,” starts with shimmery, spacious guitar and drones of feedback complimented by upbeat, relentless percussion that match amazingly well with Granduciel’s lyrics, which flow in a stream of consciousness. These two different styles are most perfectly paired on the song “A Needle in Your Eye #16,” which features a chugging, train-like rhythm that pushes the track forward, rolling over a fuzzed-out shoegazer guitar.

Of course, blending relatively dissimilar rock-n-roll sub-genres can sound horrible in the wrong hands, and can likewise sound almost revelatory when done properly. The majority of reviews of Wagonwheel Blues will likely focus on the band’s ability to patch together elements of different influences (much like I have for most of this review). However, The War on Drugs debut album, Wagonwheel Blues, works not because of the bands ability to deftly blend the styles of different influences (although they do this very well), but primarily as a result of clever lyrics, excellent song-writing, and catchy melodies.

Other highlights on the album include the visceral, but meandering “There Is No Urgency” and the sprawling, atmospheric “Show Me the Coast.” Ultimately, this record is so good that, like Kasey’s dark chocolate cookies, you’ll find yourself hooked and eagerly anticipating your next fix.
The band’s label, Secretly Canadian, is offering up an MP3 and a down-loadable music video from the album: