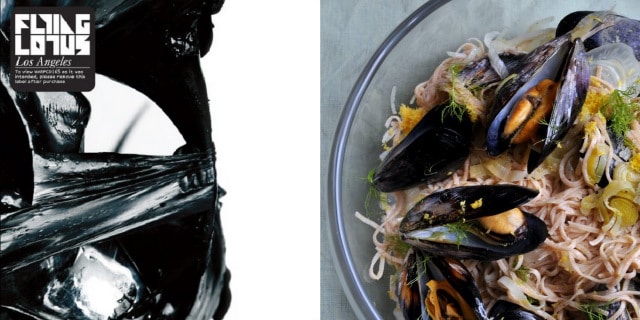 This homemade spaghetti with mussels, leeks, fennel and lemon is so amazingly “on”.  When we prepared it, we used fresh mussels we had bought from an oyster farm along the Pacific, fresh fennel and homemade spaghetti.  It was mesmerizingly tasty, and just felt so hip and modern and delicious.  This dish features beautifully unique textures, intricate flavors, and a visually appealing presentation.  That is why I’m pairing it with one of my favorite albums of the past few years: Los Angeles by Flying Lotus’ (a.k.a. FlyLo, a.k.a. Steven Ellison).  Los Angeles artfully manages to encompass both the good and bad of the city it borrows its name from: it is simultaneously clean and grimy, safe and dangerous, conventional and experimental – but like city of Los Angeles – the album is also always modern, always viscerally textural and always exciting.

Because it is so intricately textured, Los Angeles is a sonic delight.  Throw on a pair of headphones and close your eyes: you’ll swear you can almost feel the fuzzy static and crackling ambient noise lovingly buried under those clean, smooth beats that FlyLo so carefully constructs to form the backbone of these tracks.  You can swim in the hazy, rainbow synth of album opener “Brainfeeder.” You can hear the echo of the damp, dripping rhythms and ambiance that inform the bright beats on “Breathe . Something/Stellar ST” as if the song itself were a moist cave that you could quietly explore.  Los Angeles isn’t just an album you can listen to – if you are so inclined, it is an album you can get lost in, an album you can feel with your fingers, an album to take you somewhere else.  For this reason it receives my highest recommendation.  Buy it – on vinyl of course – from Insound.

Head back to eating/sf to read Kasey’s recipe for Homemade Spaghetti with Mussels, Leeks, Fennel and Lemon.