It is pizza party time here at eating/sf and Musical Pairings!  And I ask you: what is better than a pizza party?  OK, most of us can think of a lot of things that are better than pizza parties, but I know that when I was a child, I thought pizza parties were mind-blowingly awesome.  And, in fact, they were mind-blowingly awesome since they usually included Teenage Mutant Ninja Turtles (Donatello was my favorite) and stuffed-crust pizza from Pizza Hut.  And to be honest, now that I’m an adult I still think pizza parties are mind-blowingly awesome, but now they tend to incorporate beer, rock ‘n’ roll, and pizza that is slightly more “gourmet” in nature.  So for our pizza party, I’m pairing Kasey’s whole-wheat heirloom tomato and finocchiona pizza with David Bowie’s The Rise and Fall of Ziggy Stardust and the Spiders From Mars.  After all, while I’m not as inclined to run around with my friends pretending to be a mutated ninja turtle fighting to protect the city from a gang of wannabe ninjas at parties nowadays; this amazing rock n’ roll concept album is no less creative, bizarre and straight-up awesome than the combining mutants and ninjas.

Released in 1972, Ziggy Stardust was the follow-up to Bowie’s phenomenal Hunky Dory LP.  The concept is that the album takes place in a futuristic Earth ravaged by natural resource depletion, and as a result  the end of the world is a mere five years away.  Ziggy Stardust is Bowie’s hero that has been sent to Earth from outer space to send a message of peace and love.  The lyrics to the track “Ziggy Stardust” suggest that Bowie’s fictional character is an amalgamation of a number of Bowie’s influences including Jimi Hendrix (i.e the lyrics “screwed down hairdo”, “he played it left hand, but made it too far,” and “jiving us that we were voodoo”), Jim Morrison, and Vince Taylor (who Bowie personally ID’ed as an influence for the character).  Of course, although the story is delightfully bizarre, like any good concept album the story isn’t really the highlight – the music is.  Thoughtful arrangements featuring everything from pianos to squealing electric guitars flesh out beautiful pop songs that include frequently rely on two to three syllable refrains (i.e. “five years,” “starman,” “it ain’t easy,” “all night,” and “hey man”) to invigorate already lively, electric rockers such as “Starman,” “Ziggy Stardust,” “It Ain’t Easy,” and “Suffragette City” balanced alongside melodramatic ballads like “Lady Stardust” and “Rock ‘N’ Roll Suicide.” Few records achieve such a perfect balance of sophistication, weirdness and mojo, and in my opinion – none do it better.  Ziggy Stardust is a timeless classic.  And who needs mutant ninja turtles when you have spacemen as awesome as David Bowie?  You can score a copy on vinyl from Insound.

Head back to eating/sf to read Kasey’s recipe for whole-wheat heirloom tomato and finocchiona pizza. 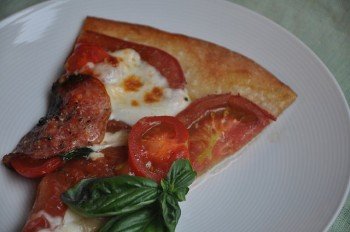