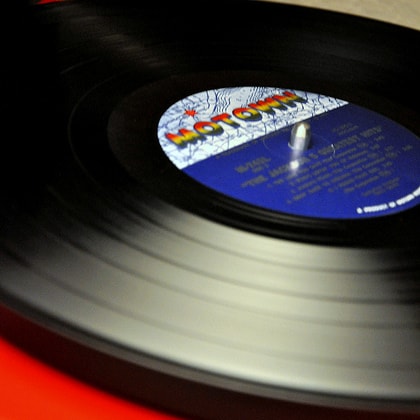 Yet another installment of our History of Pop Music series featuring the music that was said to represent “the Sound of Young America” – Motown.  A record label so unique and successful that it became synonymous with one of the most successful styles/genres of music in modern history.  Although, Motown Records continues to exist to this day, not everything released by Motown Records is often associated with Motown as a style/genre. Instead, the “Motown Sound” refers to a distinctive style of soul that was associated with the label from its inception in 1959 and continued at least until the label moved from Detroit to Los Angeles in June 1972.  The reason being that most of the music released through Motown Records between 1959-1971 shared a number of distinctive elements including similar production, instrumentation and heavily managed song-writing.  In fact, most of the songs were written by a small group of songwriters, and aside from the vocalists, many of the songs were recorded using the same band.

Motown’s founder Berry Gordy, Jr. founded his first label in January 1959: Tamla Records. Not content with just one label (after all, who is?), in September of that same year he founded his second: Motown Records (Motown being short for Motor Town). However, only a few months later, the two labels were incorporated together in April of 1960 as Motown Records Corporation.

In 1959 Gordy purchased 2648 West Grand Blvd. in Detroit, Michigan – a location that came to be known as Hitsville, U.S.A. The backroom of this building was converted into a recording studio, and it was here that nearly all of Motown’s early hits were recorded.  Their first big success was in 1959 when Barrett Strong’s “Money (That’s What I Want)” reached number #2 on the Billboard R&B charts. Shortly thereafter, the Miracles “Shop Around” reached #1 on Billboard’s R&B charts and #2 overall on the Billboard Hot 100. This was followed by the labels first #1 on Billboard’s Hot 100 with the Marvelette’s “Please Mr. Postman.” And once they broke the glass ceiling, the Motown sound was unstoppable: the company went on to release a ridiculous 110 top ten hits from 1961 through 1971. But of course, it wasn’t simply the location of the recording studio that gave Motown its’ distinctive sound.

Perhaps the greatest contribution to the Motown Sound was the consistent use of a small circle of songwriters who wrote nearly all of Motown’s material. In these early years, most songwriting, composition and production was done by Gordy, Smokey Robinson, Lamont Dozier, Brian Holland, Edward Holland and Norman Whitfield. Of this group, the trio of Holland-Dozier-Holland made up the primary songwriting team for Motown from 1962 until 1967. Dozier and Brian Holland were responsible for song composition and production, whereas Eddie Holland wrote and arranged Motown’s vocals. The trio were responsible for penning number one singles for nearly every one of Motown’s most famous early artists including The Miracles, The Elgins, The Supremes, The Temptations, Marvin Gaye, The Four Tops, Brenda Holloway, The Isley Brothers, Shorty Long and the Marvelettes. They were prolific and they worked fast. The songwriting powerhouse apparently wrote “It’s The Same Old Song” in one afternoon while they were a little tipsy. They were scanning the radio when Dozier said “it’s the same old song” in reference to all of the music being played on the radio. They had been instructed to write a new single for the Four Tops to be released the next day, and the quip about the music on the radio became their inspiration. They simply reversed the tune of the Four Tops previous hit, “I Can’t Help Myself (Sugar Pie Honey Bunch),” and using the same chord changes – constructed the new tune.

And if they make it look simple, that is because it was meant to be. Motown famously employed the “KISS” principle: keep it simple stupid. While Motown wasn’t afraid to employ string sections, horns, and whatever instrumentation they could get their hands on, the most distinctive elements of Motown’s recordings during these years include the use of tambourines to accent a rhythms back beat, vocal melodies that borrowed heavily from gospel music (such as the use of call and response), prominent bass lines, simple melodies and chord structures, and employing two drummers playing together or overdubbed on one another. And the band remained relatively constant as well: in addition to relying on a consistent team of songwriters, Motown also relied on the Funk Brothers as their session musicians on nearly all of their tunes.

“Funk Brothers” was the unofficial name adopted by Motown’s team of session musicians. And although their lineup was somewhat constant – a very large number of additional musicians contributed over the years. The National Academy of Recording Arts & Sciences recognized 13 members of the Funk Brothers when awarding the Grammy Lifetime Achievement Award, but many more have been credited as contributing. The Funk Brothers played on most Motown records from the time Gordy founded the label in 1959 until the company moved to Los Angeles in 1972. Indeed, the Funk Brothers played on tracks such as, but not limited to: “My Girl,” “I Heard It Through the Grapevine,” “Signed, Sealed, Delivered,” “Papa Was a Rollin’ Stone,” and “Ain’t No Mountain High Enough.”

For many reasons, the way Motown operated began to change beginning in the late 1960s and through the early 1970s. As noted above, Holland-Dozier-Holland left Motown in 1967 (the last H-D-H single for Motown was the Isley Brothers’ 1968 tune “Take Me In Your Arms”). Gordy moved the company’s headquarters to Los Angeles in 1972 to focus on the film industry, and when the company moved to L.A. the Funk Brothers disbanded. Additionally, beginning in the late 1960’s, the labels biggest stars started to demand creative control over their own careers. As songwriting, production and recording became less centralized, Motown moved away from its signature sound. And although many of Motown’s greatest albums and artists were yet to come, it was definitely the end of an era.

(links to individual MP3s removed – download the full mix above)